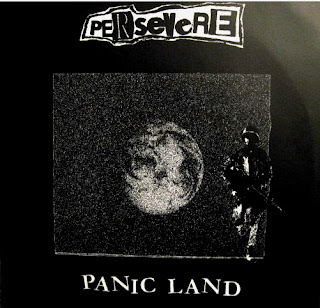 First vinyl release by PERSEVERE (I think...) on Insane World Records. This was released sometime in 2003 and is really good Finnish-type punk from Japan. I'm not sure if that's what they were going for since they don't have Finnish song titles like their contemporaries LAUKAUS and POIKKEUS but they have that out-of-control/bass guitar can barely keep up with the rest of the band sound that makes me think of Finnish punk. They also have at least two full 7"s that are also worth checking out.

Reviewed by my homie Music Of Extinction
Posted by Nemesio El Amargado at 6:17 PM

nice one. starting to check yer blog more and more. like what i see/hear.
this is by far the best stuff by persevere. the later stuff has a more street punk feel to it, imho. not as good as this.

anyway, keep up the good work and keep em coming.