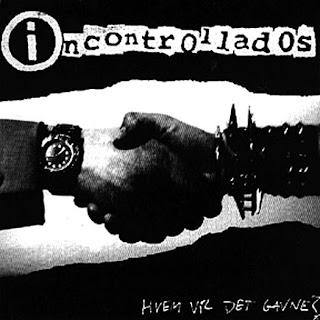 Excellent hardcore punk on the Kick'N'Punch label (R.I.P.!!!) from 2001 (not sure but that's the recording date at least). This is more along the lines of AMDI PETERSENS ARME meaning that it's straightforward U.S. style hardcore as opposed to the more "punky" stuff coming out of Denmark at the same time.... this is just as good in my opinion as APA but for some reason no one ever talks about this EP. Maybe no one likes the cover since it looks like that REPLACEMENTS album (I like them though...)? Anyways, check out the boss guitar sound and FYI "Det er OK at vaere grim" translates to "It's OK to be ugly". Close your eyes and imagine it is 1981......

Reviewed by my homie Music Of Extinction
Posted by Nemesio El Amargado at 9:43 PM

I love this band!

nice one heard the track Tyveri on mrr radio a while back and i,d been after it since thank you............

hey man! thanks for posting all the great records! continue doing that. i've downloaded pretty much everything on your site. just gold!!!!! fucking killer! i will link you on my music blog as well, so more people can check your blog out! cheers/skål from Bergman www.satanachist.blogspot.com

Hey, Lalo. I made my own blog so link it up vato!